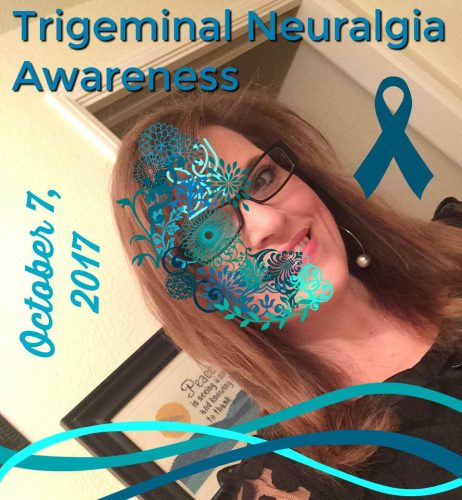 I typically don’t like to talk about my physical pain. I figure, what’s the point in that? No one likes whiners and complainers!  I also determined long ago when I had stage 4 endometriosis that if at all possible, I wasn’t going to let the pain take away from my every-day living. I don’t want physical pain to keep me from living my life. So I’d take some meds, put a smile on my face and suck it up! (Most of the time!)

So when I was diagnosed with Trigeminal Neuralgia in 2006, I tried my best to have the same attitude. (But let’s face it, some days it’s just hard!) But I believe that I’ve mostly managed to “grin and bear it”. So when I mention to people that more than 5 days of less than 65-70 degrees is quite difficult, they’re surprised. And when I mention that I have regular electric shocks to my face along the trigeminal nerve, it all sounds very Frankenstein-like to them. And when I say “TRIGEMINAL NEURALGIA”, people often think I mean TMJ, which is problems with the joint that connects your jaw to the skull bones just under the ear. People often associate it with grinding and clenching teeth. I guess I can see why people automatically think I mean that, but I don’t. And I try not to come across exasperated by it. 🙂 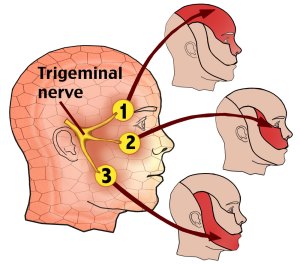 Trigeminal Neuralgia is SO MUCH DIFFERENT. “TN or TGN, also known as Fothergill’s disease, tic douloureux or the suicide disease is a severe neuropathic chronic pain disorder affecting the trigeminal nerve (also known as the fifth cranial nerve: a three-branched nerve that carries sensations from the face to the brain and controls facial motor functions such as biting and chewing).” This video might help.

As you can see, that’s vastly different from the well-known TMJ.

My form of Trigeminal Neuralgia is tremendously impacted by cold temperatures. So the only help my neurologist offered in 2006 was to move to a warm climate and stay there!  Which is one of the main reasons we ended up moving to Los Angeles. There is no cure and there are no medicines that help. In addition to chronic facial pain, it also often results in facial seizures that can last a few seconds to a couple of minutes. (I’ve heard people have seizures for several hours but thankfully mine have only lasted a few minutes at the most but multiple times a day.)  For me,  it can be a slight tic or a severe jerk and I often put my head down or move around to “hide it”. And I apologize for this visual, but I regularly feel like millions of ants are digging out of my ear. I also often have what I can only describe as an electric shock that quickly and immediately pulses through my face. It does not require any sort of action and it’s not a life-threatening incident. But it does regularly impact my speech and smile.

I’ve accepted that this will be part of my life and I’m okay with that. This should also explain why I can often be a “wuss” when it comes to cold temperatures!! And why I will usually wear a jacket or long sleeves when everyone else is sweating! But I know it could be much worse, and I’m thankful for that. If you know anyone who has TN or anyone who has severe facial pain that “can’t be explained”, please connect us. We’re a small group and it’s nice to have people to talk to!

Now I’m sure of this: the sufferings we endure now are not even worth comparing to the glory that is coming and will be revealed in us. Rom. 8:18