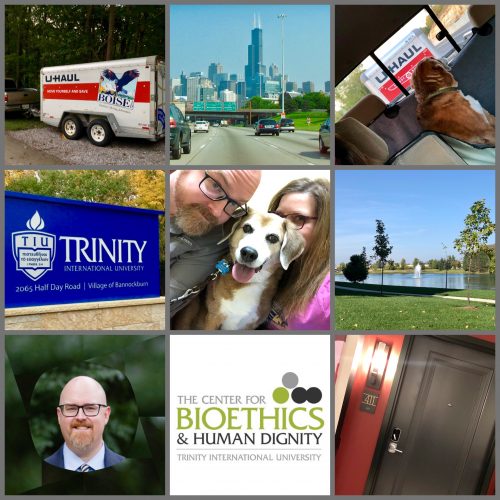 It’s been a whirlwind!! To say the least!

We’re back in the Chicagoland area for a year! We moved away in 2009 and 10 years later, we’re back!

It’s a very LONG and providential story but the short of it all . . . Matthew was offered an interim director and professor position for one year at the Center for Bioethics and Human Dignity at Trinity International University in Deerfield, so we‘ve temporarily moved back to Chicago! (You can see the announcement from President Perrin HERE.)
That also means many of you should expect me as a visitor in the winter! 🥶YIKES!🥶 Seriously, I’m nervous. I keep telling people that it’s worse to know what you’re getting yourself into. When we moved in 2002 from Louisiana, we had no idea, so we were joyfully ignorant. HA!
But now.
Now.
NOW we know what’s probably coming in January and February, and the anticipation of that is crazy! But we’re preparing slowly and enjoying the end of summer/beginning of fall.
Yes, it was a whirlwind and it happened SO FAST. (We basically interviewed, accepted, drove across the country, packed, rented an apartment, and moved in 2 weeks!) But we’re incredibly thankful and excited about the year.
If you’re in the Chicagoland area this year, let us know. As always, we love to see our peeps! We don’t have a guest room but Hampton Inn is across the street! And if you’re still in the Chicago area, let us know, we’d love to catch up!